Mjolnir - The Hammer of the Norse God Thor

The name Thor is undoubtedly one of the most recognized names all over the world. The Norse God is a symbol of strength and protection, and his hammer is depicted as one of the most awe-inspiring and powerful weapons to have ever existed. Besides having an interesting history and many different meanings, the magical hammer is one of the reasons why Thor is pretty much the most prominently mentioned of all 12 Norse Gods.

What Does Mjolnir Mean? While almost all people have heard about Thor’s hammer, its name and significance are far less recognized. The name Mjolnir is derived from an old Proto-Germanic form and means:

In case you are wondering how to pronounce Mjolnir, let us help you: me-OL-neer. Despite its many meanings, there are two main things that we associate this weapon with, and they are thunders and lightings.

It is believed that when Vikings heard thunder or saw lightning, they immediately knew Thor had used his hammer to kill another giant. Thor’s hammer is also known for the fact that it is powerful enough to destroy even a mountain. Still, Mjolnir is so much more than a weapon, and the story behind its creation is nothing less than fascinating.

Check out our Mjolnir Jewelry selection for the very best in unique or custom, handmade pieces - HERE

What Are the Origins of Mjolnir?

There are many accounts regarding the origins of the fearsome weapon, but the wildly accepted one is found in Snorri Sturluson's Prose Edda the Skáldskaparmál. According to it, Loki made a bet with Brokkr and Sindri (or Eitri), two dwarves from Svartalfheim, the cavernous home of all dwarves.

Having the intention of causing mayhem, Loki taunted them and told them they could never forge three creations better than Odin's spear Gungnir and Freyr's foldable boat skioblaonir. The dwarves, being prideful, decided to prove Loki wrong, and that is how some the three most discussed creations in Norse mythology were created:

The interesting story about ancient origins also explains why Thor’s hammer has an unusually short handle. Loki, not wanting to lose the bet, disguised himself as a fly and bit the brothers a couple of times. The last bite Brokkr had was so deep that blood ran into his eyes and he was forced to stop working. That’s the reason why he couldn’t finish the last creation- Thor’s hammer, and when Sindri took Mjolnir out of the forge, the handle was much shorter than expected.

What Is the Role of the Mjolnir? 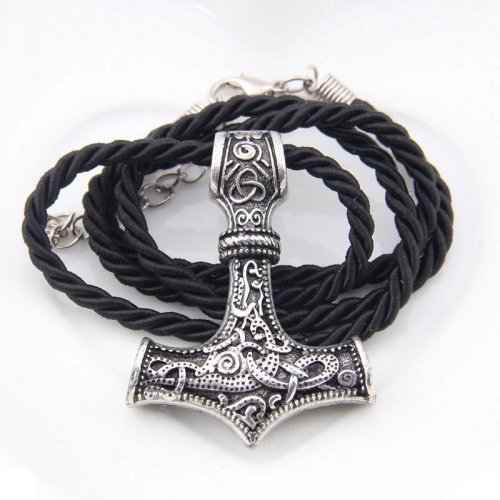 Even though, Mjolnir is best known for its use as a weapon. In Norse religion, the hammer was also used in many ceremonies to bless births, marriages, and even funerals. Thousands of Mjolnir amulets have been discovered in different archaeological sites and even after the Old Ways began to fade, people continued wearing them.

Despite the fact that the role of the God’s hammer is different in mythology and Norse religion, it is always connected to the forces of chaos. When Thor puts an end to a giant’s life he banishes the forces of chaos, and he also does the same every time he blesses a birth, marriage, or the deceased with his hammer.